To Szabo, executive chef at Match Cuisine & Cocktails located in the FOUND:RE hotel in downtown Phoenix, the flames of his 900-degree wood-burning oven and adjacent sliding grill fueled by Arizona pecan and oak represents more than essential kitchen tools. The equipment symbolizes a thoughtful artfulness that inspired Match’s menu, a mix of global street food and local ingredients.

“When we conceived the menu we asked, ‘What’s the artfulness in fire?’ We designed the whole menu around the oven and grill,” says Szabo. “From there, we went crazy. We currently support 82 different locals farms and growers. Our concepts take global flavors, textures, aromas and colors, and then we rewrite the recipe to implement as many local ingredients as possible.”

It’s no coincidence the boutique hotel features the work of local artists. The restaurant’s name, which refers to the art of striking a match, also is by design, according to Szabo.

“It’s all tied together. With the inception of fire, it gave cavemen and cavewomen light, warmth and the ability to cook their raw proteins,” he says. “When you hear fire pop, crackle and explode, it’s a release of energy. To me, fire is a glowing beacon of light that brings a community together. That’s the artfulness.” 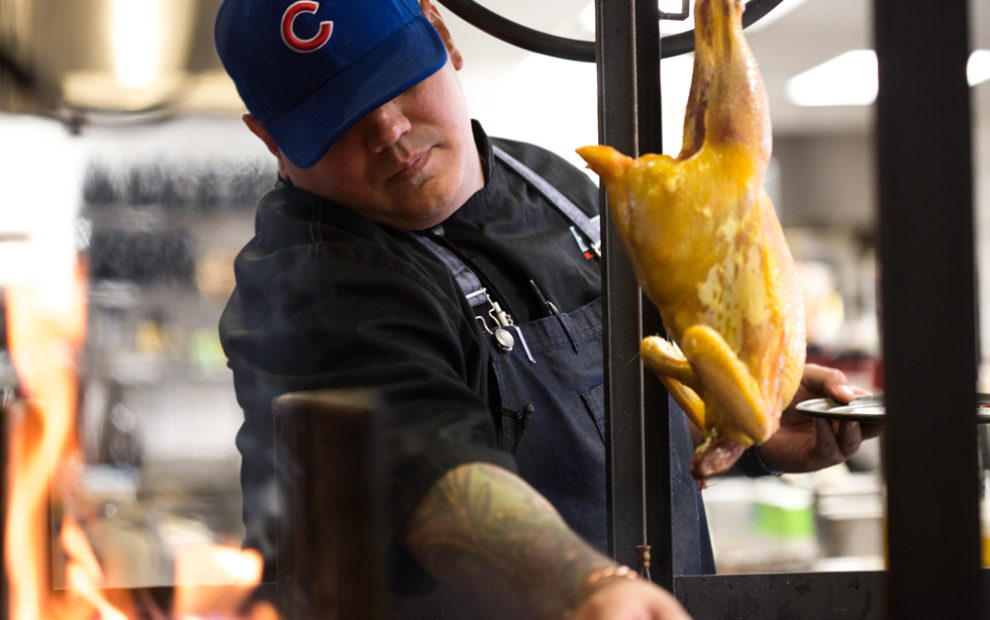 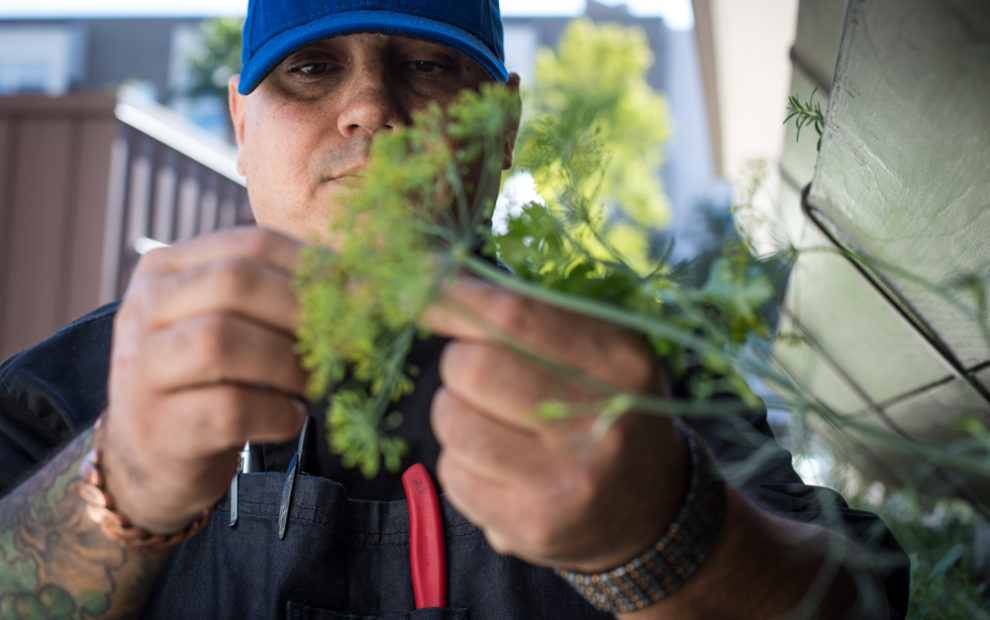 The original hunters and gatherers of the world certainly would be impressed by Match’s Forno Bravo oven and Santa Maria-style grill that can be raised or lowered to create the perfect fire for shareable, small plates like the Barrueta, a wood-fired pizza topped with house made Filipino longanisa, young coriander and crunchy garlic. Or the wood oven-roasted Moroccan lamb meatballs, with organic tomato chutney, preserved Meyer lemon, garden mint, quark and pistachio.

Fire, and its byproducts, are always on Szabo’s mind as he thinks about how to create food via a flaming heat source.

“Fire inspires me. And the possibilities are endless for cooking on fire,” says Szabo, who graduated from the Scottsdale Culinary Institute and cut his teeth at the venerable Mary Elaine’s at the Phoenician. The veteran chef’s cross-country resume includes stints in Laguna Beach, Boston and Chicago, as well as serving as chef de cuisine at Top of the Rock in Phoenix.

“Launching Match has made me look at food differently,” he says.

Prior to joining Match, Szabo worked for the Maricopa Community Colleges, where he developed a campus-wide sustainable food program. His sense of preservation is apparent at Match, where fire elements are often repurposed through discovery. 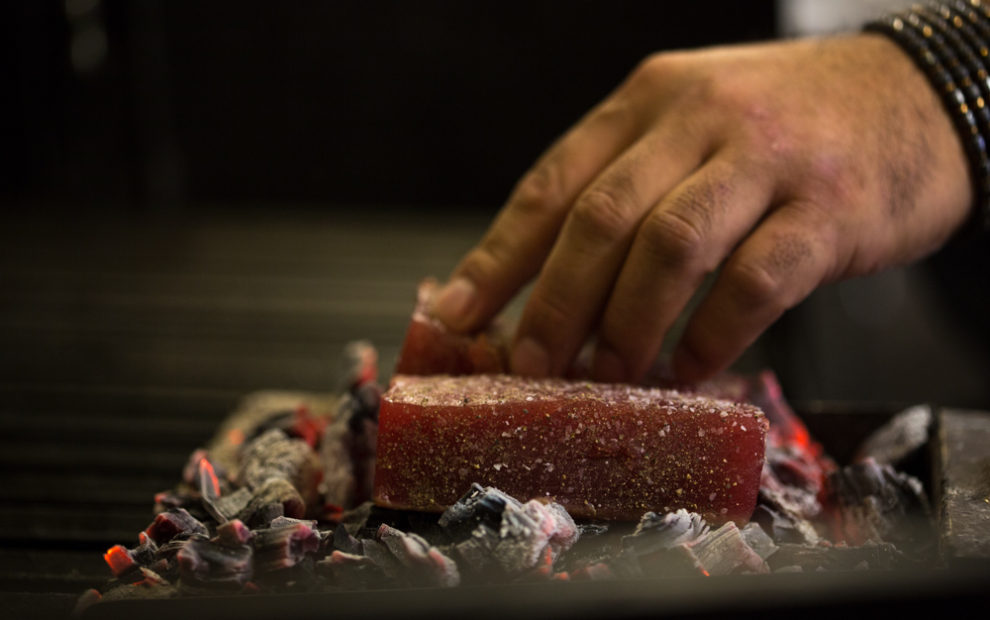 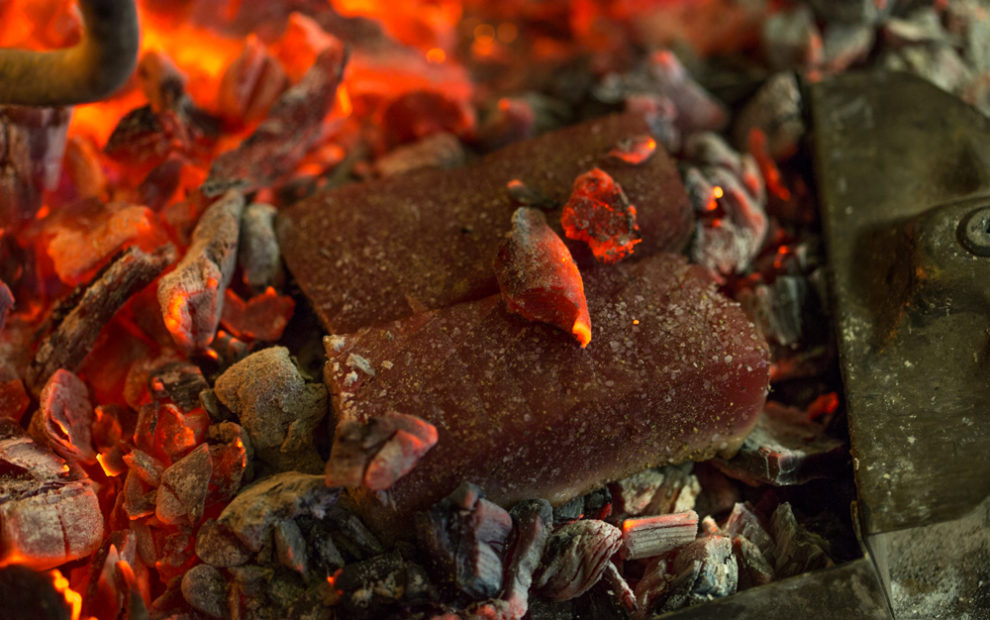 One of Szabo’s kitchen experiments involved dropping an olive-oil poached ahi into burning ashes and then cooking it over the moveable grill.

“Ash encapsulates a lot of flavor into the tuna and sears it immediately,” says Szabo, who pushes the envelope on a daily basis to develop menu items incorporating the fire process. “Since ash is so hot, we said, ‘Let’s do something with it.’ That’s how the tuna dish came to be. At some point, there is an element of fire on the menu—85 percent of menu has either been started, fully prepared or finished in a wood oven and/or wood burning grill.”

Match’s braised short ribs also are done in the wood oven at night, where the residual heat is between 275 to 300 degrees.

“We discovered if we put them in a roasting pan and closed the oven, the next morning all the flavor of the wood really comes out,” Szabo says. “The oven holds the heat all night. We’re wasting very little heat here.”

While Szabo feels fire helps drive Match’s unique menu, he understands the visible effects of combustion are completely in charge of the culinary outcome.

“Many people believe they control fire. At Match, the fire controls us. The fire tells us, ‘I’m at great heat. Or, I need more wood.’ ”

Watch Szabo cook with fire in “Fire,” the fourth installment of “Elements,” a collaborative film + photo series produced by Food Talkies and Bite Magazine designed to elevate the storytelling experience.