During my first hour on Molokai, I was distracted by the slow and spotty Wi-Fi and the lack of a Starbucks. By sundown, I’d forgotten about network instability and globally-branded coffee on Hawaii’s fifth largest island. And that’s the reason you should visit Molokai.

While it’s minutes by flight from neighboring Hawaiian islands, Molokai may as well be a million miles away from any other tropical destination. Many places lure you with seductive images of paradise—swaying coconut palms, private unspoiled beaches and surreal sunsets—but few deliver on the promise of a true escape.

In Molokai, the reality matches the postcard. Once you check in, you officially check out from the rest of the world. 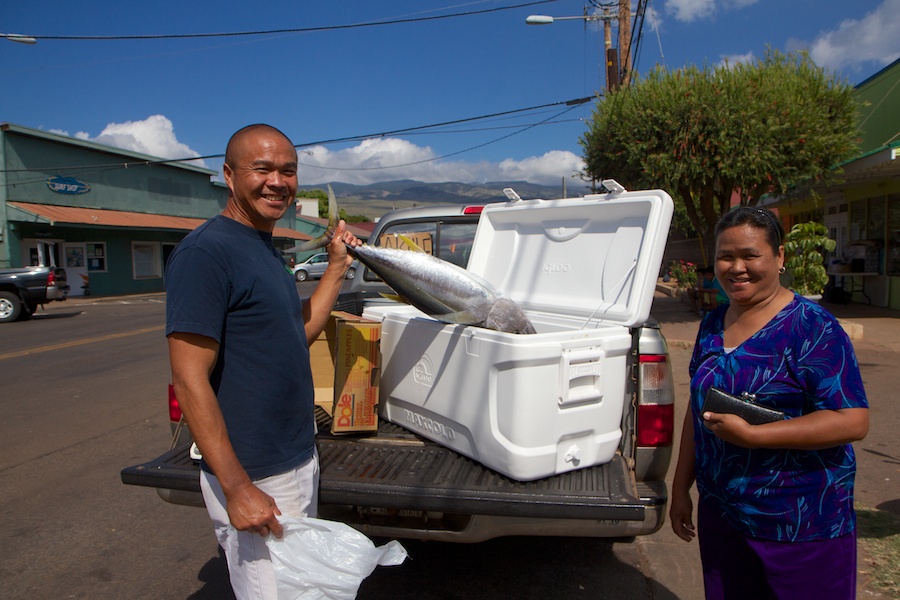 Caution: No tourists ahead

It’s easy to unwind in Molokai because there’s no distinct hustle or bustle. With only 7,345 residents and 50,000 visitors per year, you won’t experience tourist lines or the usual sightseeing attractions. And with no street lights, resorts or big box stores; one main highway and a maximum speed limit of 45mph, the pace is laidback and attitude unpretentious.

Plus, the rural island is unapologetically stuck in time. If you do complain about lost Internet connections, for example, locals just smile, shrug their shoulders and say, “That’s Molokai.”

In the main southern coastal town of Kaunakakai, where half of the island’s residents live, things haven’t changed much since the early 1900s. The cowboy port with a slight hippie vibe is roughly three city blocks and 15 minutes from the Molokai Airport off Highway 450.

Kaunakakai has historic landmarks, the state’s longest pier, and is the place for supplies with a handful of mom-and-pop retail stores and restaurants. It’s fair to say Molokai is not a fine dining destination, but you can grab casual and filling fare at several spots in Kaunakakai such as Paddler’s Inn, Molokai Pizza Café and Molokai Burger. 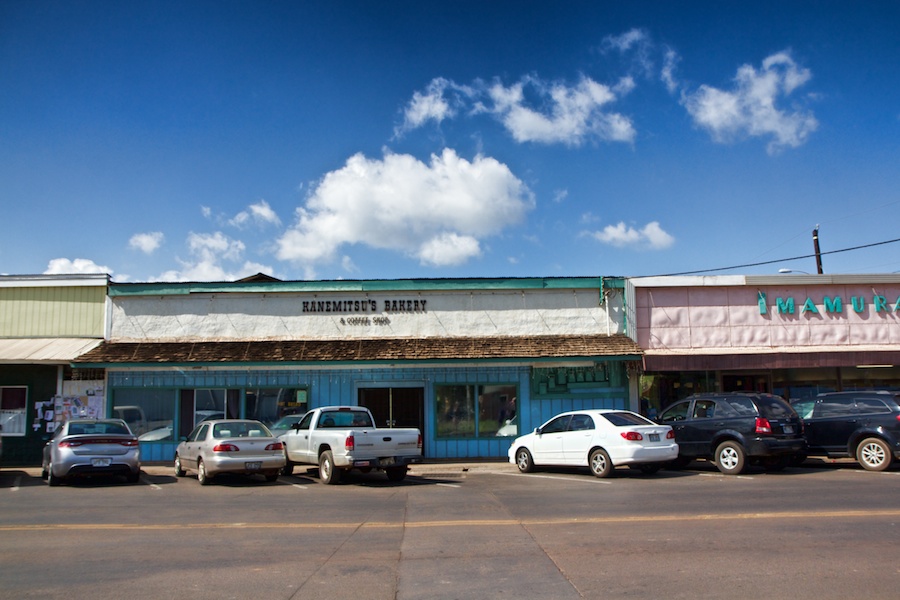 Who’s up for a bread run?

Molokai is known as the friendly island, however, and nowhere is the welcome mat more gracious than at Kalele Bookstore & Divine Expressions in Kaunakakai. The eclectic gift shop is owned by Teri Waros, a local gem and a news source for all-things Molokai.

One of the more quirky things to do in Kaunakakai is to go on a late-night hot bread run at Kanemitsu Bakery. The legendary, non-athletic carb event takes place after-hours (around 8:30 p.m. to 3 a.m.) in the dimly-lit alley behind the bakery—just follow the Christmas lights. There, a line forms at the red window where patrons buy large hot rolls lathered in a choice of fillings that include butter, cinnamon, cream cheese, and strawberry or blueberry jelly.

With not much else happening after sundown, the evening bread excursion, which feels a bit criminal, is an entertaining ritual for both visitors and locals, except on Mondays when the bakery is closed.

Checking in to paradise

Given the absence of resorts and trendy accommodations in Molokai, lodging is limited, but most visitors can book condos and private home rentals during their stay. You can also make reservations at the only hotel, the Hotel Molokai, located two miles from downtown Kaunakakai. The throwback Polynesian landmark has open-air, bungalow-style guest rooms, and is perched on Kamiloloa Beach with clear views of Lani and Maui.

Hotel Molokai is a popular gathering place since it’s only one of two establishments on Molokai with a liquor license. On Monday nights from 4 to 5 p.m., general manager Michael Drew welcomes hotel guests for a free drink at Hale Kealoha Restaurant & Bar, the hotel’s bar and new upscale restaurant that sources mostly local food. The bar is hopping on Aloha Friday from 4 to 6 p.m. when it bursts with local flavor as both guests and residents listen to ukulele and slack-key guitar music and engage in the Hawaii tradition of “taking story.”

If you’re lucky, you’ll be treated to an enchanting hula song and dance from one of the locals. 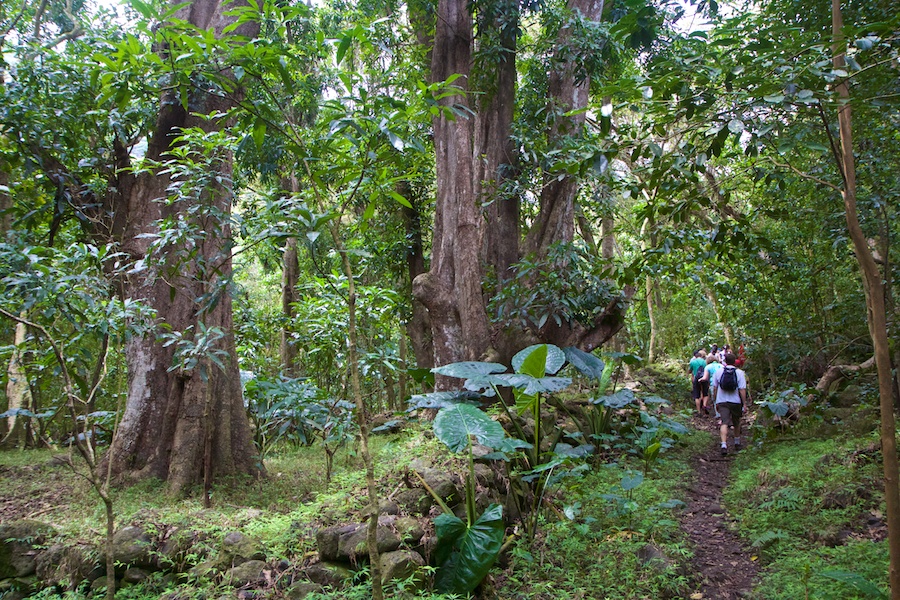 Though it might seem like there’s not much to do in Molokai, nothing could be further from the truth. The diverse and open-air terrain—the north side has lush green valleys, and the south and the west ends are arid and dry—provides a stunning natural backdrop for exploration. Plus, nearly non-existent traffic and only 10 miles at its widest point makes Molokai the perfect locale to set out on scenic road trip.

Along the path, the “Welcome to Molokai, Now Slow Down” signs are a cheeky reminder to ease up on the gas pedal and appreciate the simpler things in life. Part of the lesson includes discovering ancient fish ponds, hidden waterfalls, macadamia nut farms and small enclaves, such as Maunaloa, a former plantation village in the hills overlooking the island’s west coastline.

Slightly larger than an intersection, Maunaloa has unique shops including the Big Wind Kite Factory, a general store and an abandoned movie theater. For a jolt of caffeine, stop at Coffees of Hawaii Espresso Bar & Café, in the upper slopes village of Kualapu’u, where you can order the signature brew, Mocha Mama, and a snack or sandwich for the road. Visitors also can take a self-guided morning espresso tour on the deck of the company, a 100-acre plantation and mill that produces and distributes 100 percent Molokai coffee. 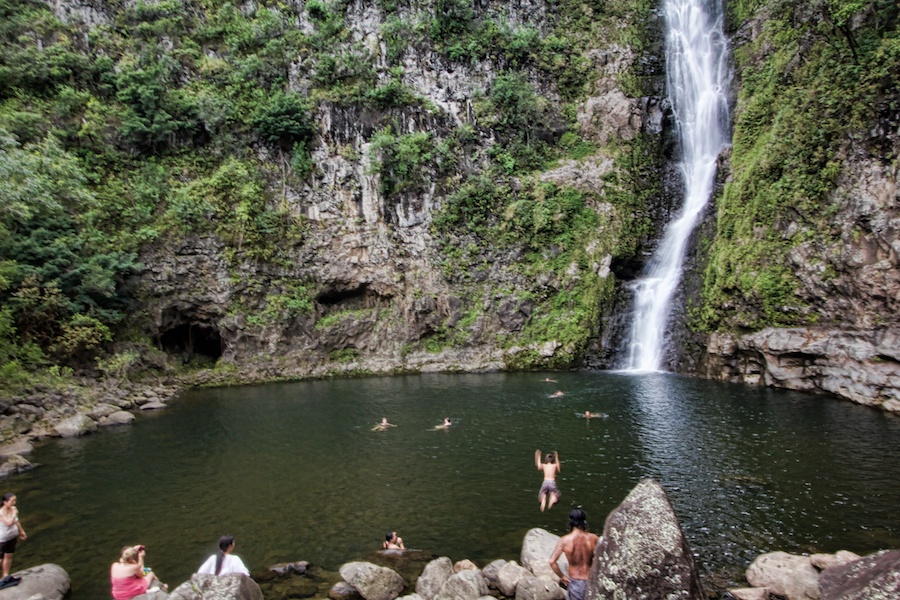 Hike into a lost civilization

Molokai is believed to be the birthplace of the hula and considered the most authentic Hawaiian island with the highest percentage of native Hawaiians in the state. It’s impossible to travel anywhere on Molokai without observing the deep respect locals have for tradition and the ways of their ancestors.

To get a glimpse into Molokai’s past and cultural preservation of its heritage, visit one of Hawaii’s earliest settlements in the historic Halawa Valley located on the east side. Anakala Pilipo Solatorio, one of the oldest living descendants of Halawa, and his family host a meaningful, three-mile cultural hike through a sacred, lost Polynesian area of native species, worship sites and taro terraces that dates back to 650 AD. The reservation-only hike includes a ceremonial protocol presentation and an opportunity to swim below the 250-foot, double-tiered Moaula Falls.

En route to Halawa, stop at Manae Goods and Grindz Store to purchase daily plate specials and convenient essentials. And remember to have your camera ready for a lean-in, photo-worthy drive around the Halawa Bay as you make your spiral ascent to the valley. 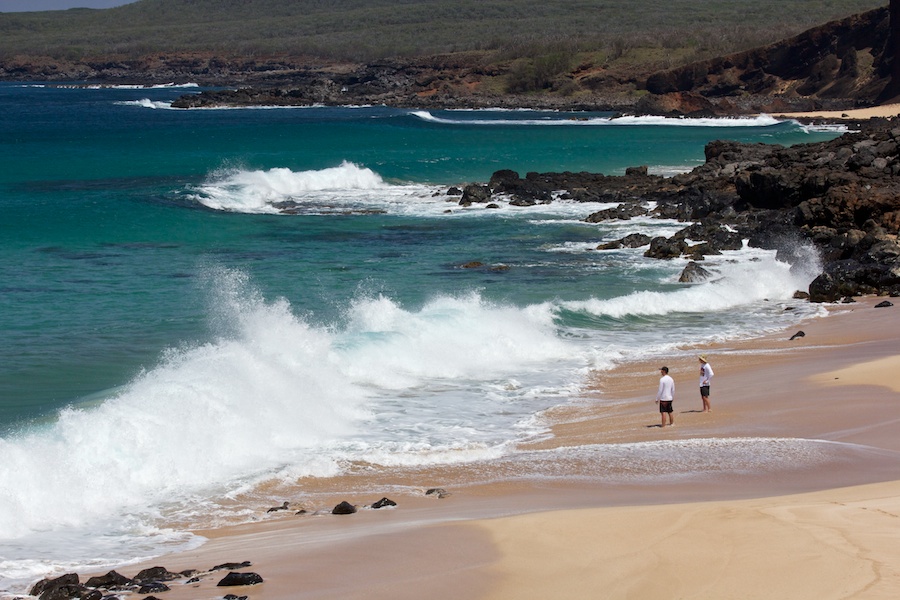 For the more ambitious, the island is a playground for several land, water and air activities such as bicycling, camping, hiking, golfing, sport fishing, scuba diving, snorkeling, surfing, whale watching, kayaking and paddle boarding. If you’re unsure what to do, Molokai Outdoors can hook you up with rentals, help plan a memorable sightseeing adventure, and educate you on the best and safest places to participate in recreation.

And, of course, you can enjoy a reflective stroll on one of Molokai’s magnificent, untouched beaches, which is often a solo journey since most are secluded. On the west side is Papohaku Beach, a pristine white sand beach that is 2.8 miles long.

In addition, the west side is home to Kapukahehu Beach (aka Dixie Maru Beach), the perfect place to capture the green flash at sunset. To snorkel over Hawaii’s largest coral reef, head to Kumimi Beach (aka Twenty Mile Beach) on the east coast, with calm waters and golden sand. 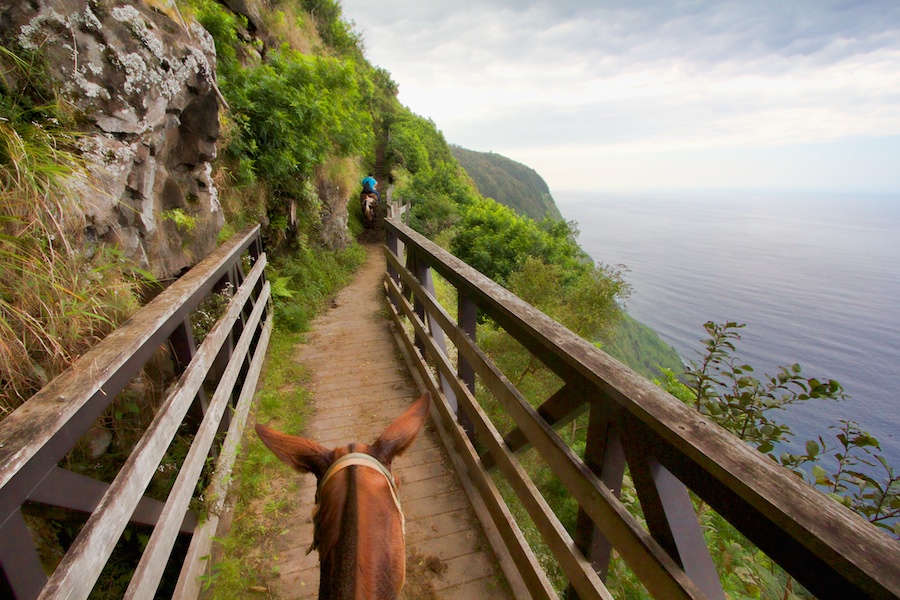 A purposeful ride into the past

To combine breathtaking scenery with a haunting history account saddle up for the Kalaupapa Mule Tour and the ride of a lifetime in Kalaupapa National Historical Park down the largest sea cliffs in the world.

Kalaupapa’s Rare Adventures LLC’s stable is located “topside” Molokai off Highway 470 near Pala’au State Park and the Kalaupapa overlook, where you start the 2.9-mile, 90-minute round-trip trek that descends 1,700 feet on a well-trodden stone path with 26 switchbacks and epic views of the rugged Pacific coastline below. The trail ends at Kalaupapa, the site of a former isolated colony where Saint Damien ministered to patients with Hansen’s disease (leprosy) who were exiled to the peninsula location starting in the late 1800s due to their contagious status.

Once you reach the settlement, a Damien Tours guide introduces you to the once hidden community of homes, churches, cemeteries, a care facility, a post office, a bookstore and, most importantly, the lives of its residents.

You might have the opportunity, as I did, to meet one of the few remaining residents such as Clarence, aka “Boogie.” Now in his mid-70s, Boogie was quarantined to Kalaupapa as a young boy. Despite being cured and free to leave since the late 60s, he chooses to stay in this otherworldly location where three of his siblings are buried. His carefree disposition and peaceful introspection about the painful facts that forced him to live in the peninsula he calls home is a testament to human strength and courage.

It’s tempting—and completely acceptable—to do nothing in Molokai except sit under a shady palm beachside with a book, a refreshing drink and no agenda. Yet the ability to witness the unbelievable beauty of Kalaupapa, which is only accessible by foot, mule, air or boat, is a must-do itinerary item. And to learn about the struggles and triumphs of its iconic residents is a life-changing event that forces you to examine your own existence.