A career as a professional bartender—let alone accolades as one of the Valley’s best—wasn’t exactly on Robert Porter’s radar when he got his first job in the beverage industry. In fact, it was just supposed to be a moonlighting gig, a one-off to help him supplement his day job as a graphic designer.

“I figured I could make a lot of money in a few hours. It was a temporary investment I could do on the side while I focused on my real career—whatever that was going to be,” he says.

At first, all directions pointed to a visual arts path for Porter, an Army “brat” who moved to Arizona at age 11, and has been drawing and painting since he was a kid. After graduating from the Al Collins Graphic Design School in 2004, Porter started working for a publishing company, but quickly decided to add some depth to his resume and pocketbook. He enrolled at the Bartending Academy in Tempe and eventually worked T-squares by day and beverage menus by night.

When the publisher was bought out, Porter leaped from the design world to a variety of occupations that included traveling medical supply sales, a stint in the Army Reserves, door-to-door home and car stereo sales, and creating stadium banners for the Phoenix Suns. As he evaluated his options, Porter realized how much he missed bartending.

“I like to make things. Bartending is another form of creativity, like graphic design. I’m on my feet, it’s fun and lighthearted. And I like to talk. It had everything I was looking for,” he says.

Since Porter hadn’t bartended in three years, he re-enrolled in a refresher course at the Bartending Academy to help him get up to speed and transition back into the business. He continued hitting the sales pavement, but soon got a major break when he was hired part-time at the legendary Trader Vic’s at the Hotel Valley Ho in Scottsdale.

“I got really lucky to work at an amazing property,” Porter says. “Trader Vic’s is known for its multiple ingredient drinks. It was like learning a whole new language. It was intimidating, but it really challenged me.”

Porter eventually left the sales grind for good when the Trader Vic’s gig evolved into a full-time job that lasted four years. He then headed to the Sanctuary Resort from 2011 to 2015, an experience he describes as a big step up in his evolution as a bartender.

“I went from making multiple ingredient drinks to more refined drinks that focused on fresh ingredients like juices and herbs and how to make a cocktail that works,” he says.

Stints at Chelsea’s Kitchen and the Second Story Liquor Bar, where Porter got hands-on education in whiskey and classic stirred drinks, also helped him elevate his bar game. In 2015, he landed his current job at the Thirsty Camel at the Phoenician Resort, where the focus on spirits is using indigenous ingredients to create distinct cocktails. With each bar pit stop Porter, a whiskey on the rocks sort of guy, has fine-tuned his libations skills as well as his taste buds.

“I now have a taste for bitter, sour and savory—all those components,” he says.

Regardless of the drink order, when it comes to crafting an exceptional pour, Porter sticks to the basics. He uses a jigger and a well-established theory taught in graphic design school to find the perfect cocktail balance: the Golden Ratio Rule, also known as divine proportion.

“I’m a bartender who measures and believes in the 2-to-1 ratio,” he says. “It’s important to understand the sugar and acid balance. And I adjust the properties of each ingredient to find what works. It’s like baking a cake and having a foundation to build on.” 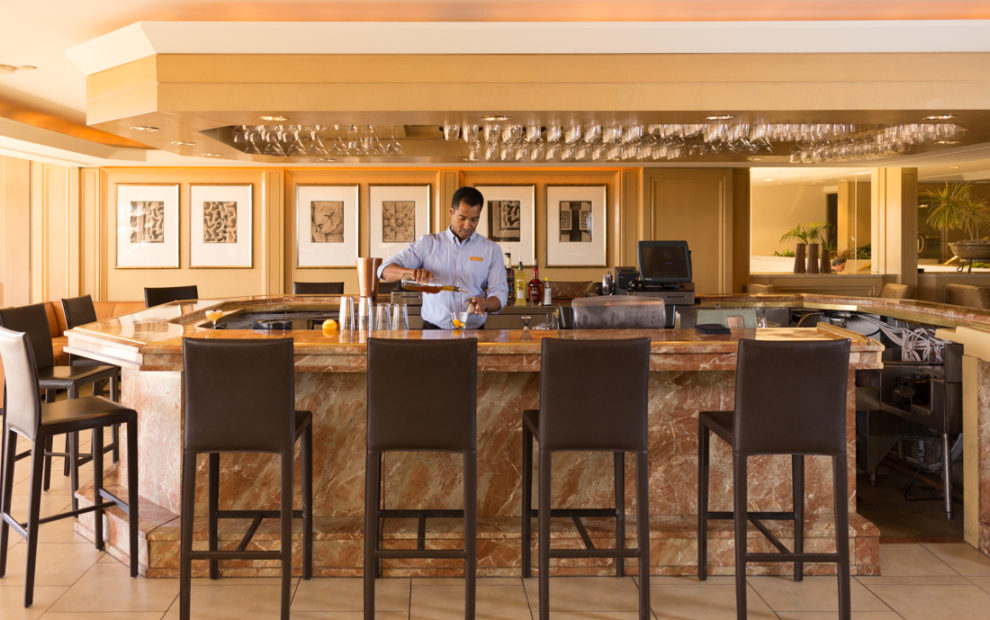 The science of bartending is important to Porter, but so too is the art of making cocktails that shape the entire food and beverage dining arc. He’s a consummate student, eating out often at diverse restaurants to train his palate. He’s also learned from chefs he’s worked with on how to pair food and beverages to enhance their flavors.

“I think like a chef,” he says. “You have to have a certain culinary instinct, and a great sense of taste and smell to know how far to take-the aromatics, bitters, herbs and build the different textures.”

His attention to detail and commitment to precise measurements have paid off. In March, Porter took top honors at the seventh annual Devour Phoenix Bartending Competition, a kickoff event for Local First Arizona’s Devoured Culinary Classic. His winning entry was a twist on a classic: a whiskey sour made with local ingredients selected from a mystery box including spirits from Three Wells Distilling Company, honey vinegar, lemon, orange, basil and egg white.

While such friendly competitions are a chance for Porter to experiment and rub shoulders with his peers on a public stage, he thinks the real skill—and spirit—of a bartender should be more about providing impeccable hospitality than putting on a show.

“I want customers to have a memorable experience that changes their entire day. I want them to say, ‘That’s the best cocktail I’ve ever had.’ ”

Porter’s creative acumen goes beyond the bar and onto the canvas. See his art in action here.