Any conversation on the topic of ice in the proximity of Phoenix must include words like “evanescent” or “transitory” or another term for something that isn’t meant to hang around for very long. That’s because anyone familiar with our heat-centric climate would have to agree that—unless it’s covering the floor of a hockey rink or being admired on some distant mountaintop in the dead of winter—Phoenix ice is, well, something of an oxymoron.

Maybe that’s why it took someone from afar, a native Scotsman, to demonstrate just how cozy a relationship the city can have with frozen water, especially when it’s getting hand-cut into a shimmering gem and plunked into a classic cocktail, such as an Old Fashioned or a Sidecar.

Ross Simon, lately of the Valley of the Sun and formerly of Law, Scotland, was the right man for the job. After burnishing his bartending skills in a few of London’s leading cocktail establishments, Simon migrated to the States, where he spied an opportunity to introduce Arizonans to a higher echelon of the mixologists’ art.

Last year, Simon and his partners—Bob Tam and Rajan Hansji—opened Bitter & Twisted Cocktail Parlour’s doors in the recently refurbished Luhrs building at Central and West Jefferson, their vision for it couldn’t have been more straightforward. In Simon’s words, they set out “to create a really innovative, fun cocktail bar, where people can get a great drink in a welcoming environment.”

Conveniently set, as it is, on the iconic Luhrs highly accessible street level, Bitter & Twisted has become, much to Simon’s satisfaction, a stylish yet unpretentious drinking den and eatery with an enthusiastic clientele. 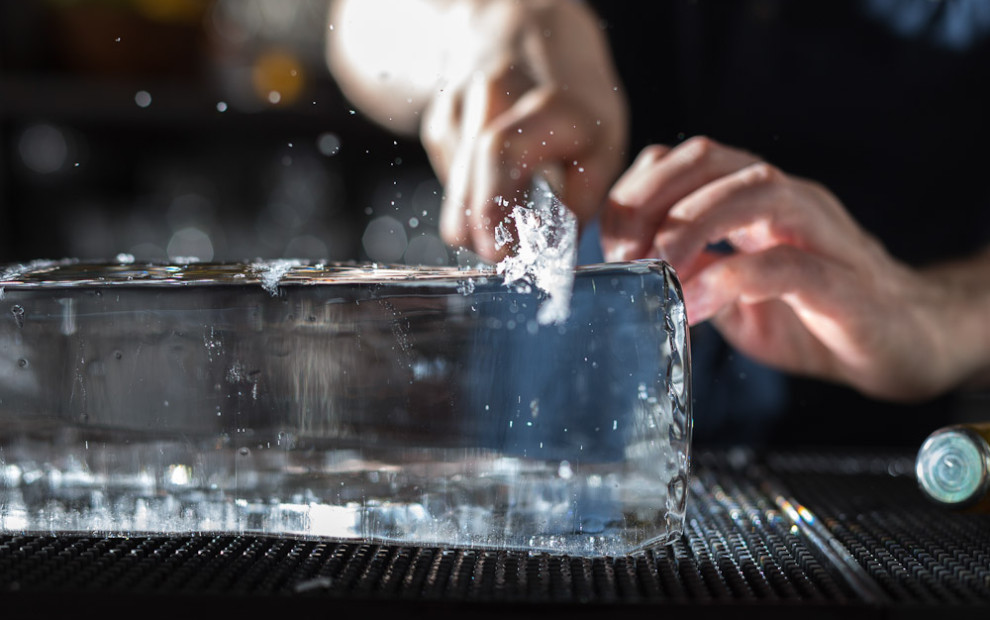 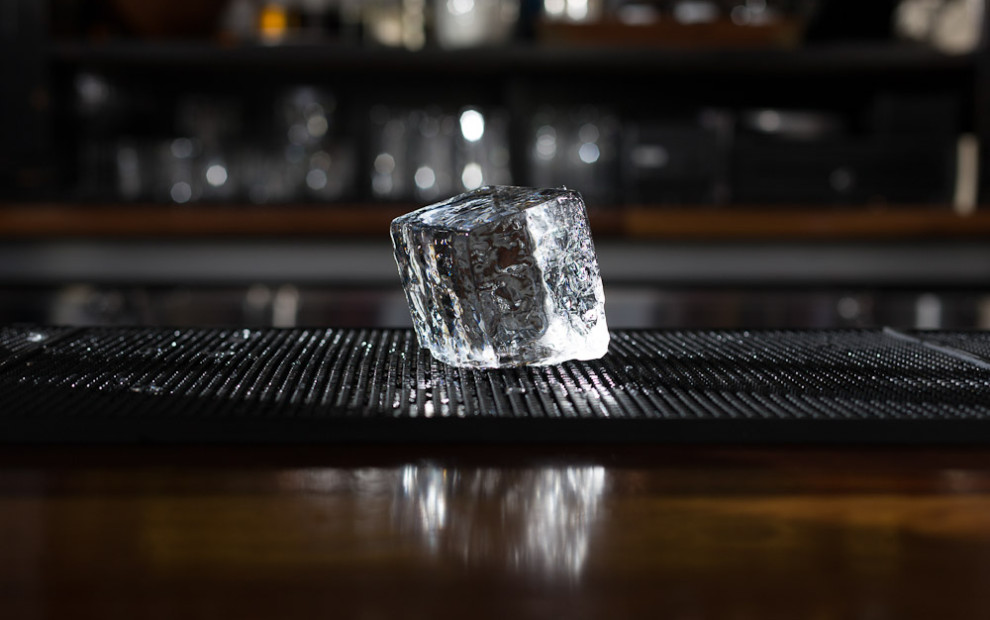 “We wanted to do something that people noticed was different than your run-of-the-mill sports bar slinging vodka tonics,” Simon notes. “We wanted them to come in and feel like they were having a unique experience.”

A unique experience at Bitter & Twisted involves a lot of things—the accommodating staff, and the lounge and restaurant’s décor, food and ambience, among them—but it also extends further, all the way down to the nature of the sparkling ice they use for their lengthy array of cocktails.

Their ice, like their other drink components, underscores the quality with which every B&T beverage is designed, crafted and served.

It wasn’t too long ago that talking about an ice program could only refer to a couple of things: the Winter Olympics or the Ice Capades. That, however, was before Simon and a cadre of cocktail-making pioneers started thinking about how important ice—in its many forms and methods of freezing—is to mixing top-tier drinks for their restaurant-going clientele.

Nowadays, thanks to Ross and his peers, finding a saloon with an ice program means that you’ve stumbled upon a proprietor with some very serious notions about cocktails and what goes into them.

For years, in fact, forward-thinking cocktail establishments here and abroad have been building cutting-edge ice programs that have led discerning patrons to wonder aloud, “What’s that thing floating in my drink?”

In downtown Atlanta, for example, a Mexican-themed bar and restaurant named Alma Cocina has beenplopping custom ice cubes made from seasoned coconut water and fresh pineapple into their tequila drinks, much to their customers’ delight. And in Philadelphia, at the Continental Restaurant & Martini Bar, guests can savor  a concoction called The 18th & Locust, in which premium vodka, fresh grapefruit and elderflower is served over a sphere of ice made from frozen Campari and rosemary.

But flavoring is just the tip of the ice cube. 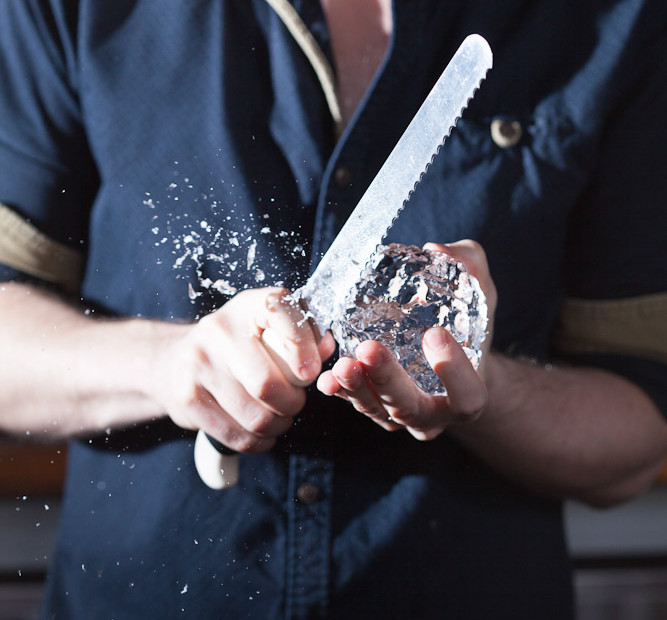 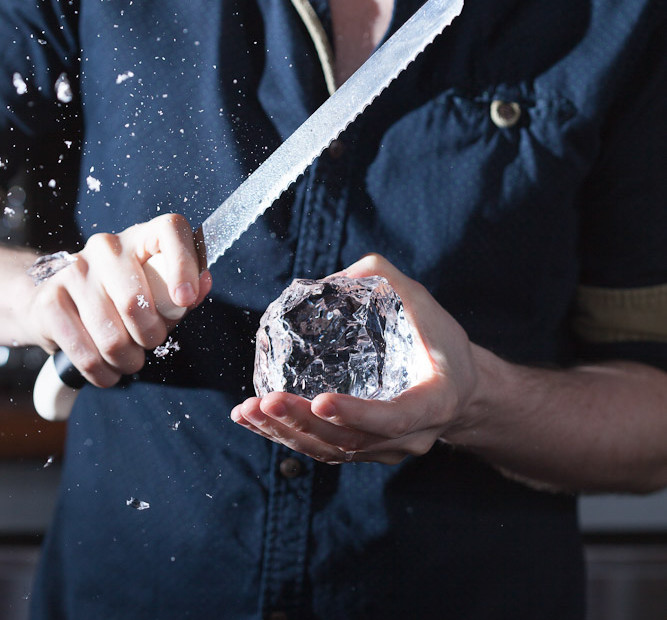 As you might suspect, there’s a deep science to everything, even ice programs. All across the country, serious-minded mixologists are congregating at an ever-increasing number of ice program seminars, where they’re having animated conversations on topics like “good ice vs. bad ice,” the importance of making ice from water treated with reverse osmosis and an ion exchange filter, Tovolo ice cube trays, vertical band saws for precision ice cutting, Hoshizaki ice makers and countless other arcane subjects all focused on building a better drink chiller.

Get Ross Simon going and he’ll talk about large-format ice and cubers with the same knowledgeable aplomb that a wine connoisseur might describe barrel fermenting and year-to-year grape yields. For one thing, Simon and his team make all their ice—four different types—in-house, freezing and cutting glistening ice blocks into jewel-like spheres, creating perfectly crystalline cubes with a high-end Japanese ice cuber, crushing pellet ice and, lastly, offering a new concept in ice-crafting called flaked ice.

Not all ice is alike, Simon instructs. For starters, quality ice must begin with quality water.

“Your ice can only be as good as the water used to produce it,” Simon says.

At B&T, they make use of a specialized nano-filtration system that ensures only pure mineral water makes its way into water glasses and, thus, into the ice itself.

“When we talk about basic ingredients—whether it be our citrus, our syrups or the spirits themselves, ice is another, equally important component,” he says, adding that dilution is an integral aspect of any cocktail. Well-formed ice keeps drinks colder for longer periods of time, slows the dilution of the ice into the drink, and, essentially, rounds out the flavors.

“We care about each of our ingredients, and if that means taking a little bit more time to make own ice and have a ‘program,’ per se, then we’re willing to do it.” 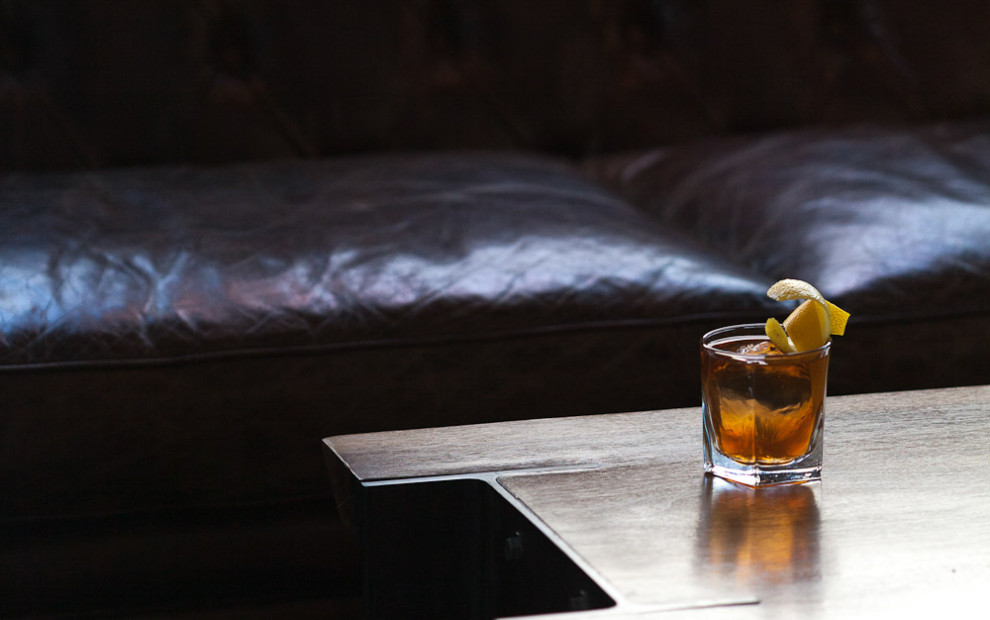 The ice varieties aren’t just for show, Simon explains. Each type possesses characteristics that make it better suited for particular cocktails. Hand-carved spheres, for instance, work well in a “neat spirit—a bourbon or scotch,” Simon says. “Or even a mixed drink, like an Old Fashioned, would be suited perfectly to this format of ice.”

Contrastingly, any cocktail that gets shaken benefits from the smaller cubes rendered by Bitter & Twisted’s pride a joy: a Hoshizaki cuber that produces perfectly uniform one-by-one-and-a-quarter-inch cubes. And anything served in a tall glass—say, a Jungle Bird, for instance—gets a scoop of crushed ice.

“As far as our flaked ice goes,” Simon explains, “I would say anything like a Queen’s Park Swizzle or a Bramble would be very suited to that kind of snow-cone-like ice.”

As focused as Simon and his team are on producing world-class ice for their cocktails, he says he likes to play down any “ice talk” from his staff to his customers. When all is said done, he says he doesn’t want to get “all connoisseur” about the pains he and his team go to to ensure that the cocktails they serve are chilled with what is perhaps the finest ice money can buy.

“I don’t even want our guests to be aware of it,” he notes. “Hopefully, the end product—the cocktail—speaks for itself. Of course, people in the industry will notice these small touches we add to each drink, but we don’t really want to make a big deal about it.

“They payoff for me is when I’m bartending and I hear a customer say to another one how good our water tastes or how clear are ice is. That’s worth a lot.”