“We have a lot of East Coast people who come in here,” says Kal Salih, perhaps better known as The Bagel Man, which he calls his Ahwatukee shop. It shares a name with his first bagel shop, which is still open to day in Hightstown, New Jersey, and run by his brother.

“I opened that one in the winter of 1994,” he says, stressing the world “winter” as he gazes through his shop’s windows into the parking lot, already warm from the morning sun. Winter here must look different.

“We even have people from Hightstown who live here now, and they come to eat my bagels,” Kal says matter-of-factly.

“We have this one girl who went to Hightstown High School, right behind my house. She has family here and now she is my customer in Phoenix,” says Kal, now a bit more proudly.

The Bagel Man has been open for four years, tucked into the foothills of this Phoenix suburb, acting more as pit stop than hangout. Like back in Jersey, most guests in Kal’s shop are on their way to work.

“What does a bagel mean to these people?,” asks Kal, repeating the question. “The bagel is every day. It’s everyday breakfast.” 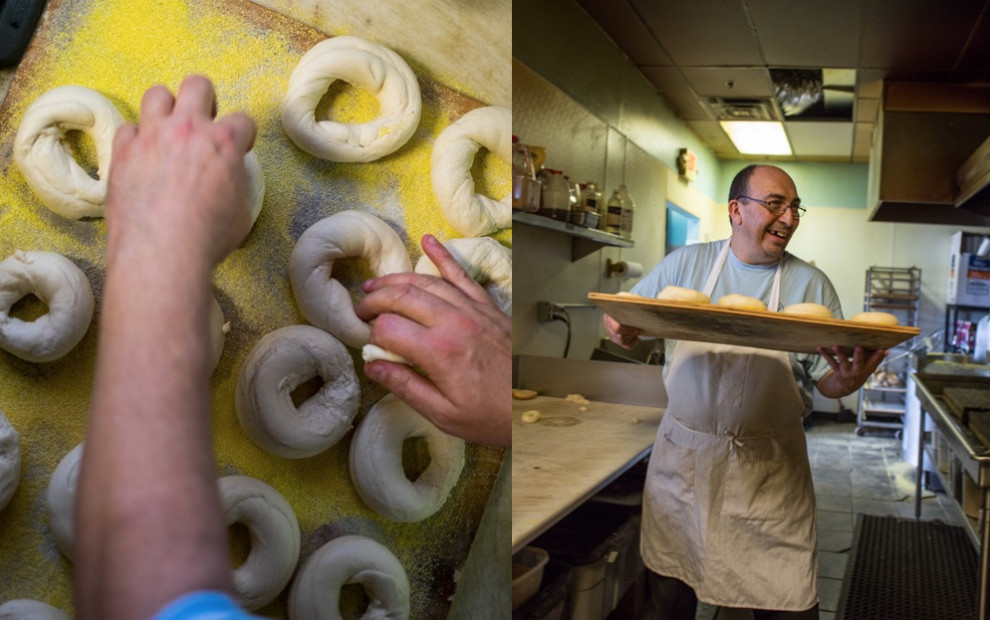 They like to say hello to Kal—if they can—if they’re from Jersey, or really anywhere back east. It’s like saying hello to an old friend or an uncle. But Kal considers himself back-of-house, working behind the scenes, waking up and starting to make his dough at 3 a.m.

By 9 a.m., his day is nearly over as he sits down with us in a bright teal side room, nearly blending in with his softer teal Bagel Man T-shirt. They just finished their bagels-for-the-office rush. The orders begin to trickle in rather than flow.

One of his staff pops his head around the corner. “Hey, Kal. We’re down to three salt bagels. Should we make more?”

“Definitely,” Kal says. He turns our way and gives us a wink. His shop is still learning to run itself when he’s not immediately available. 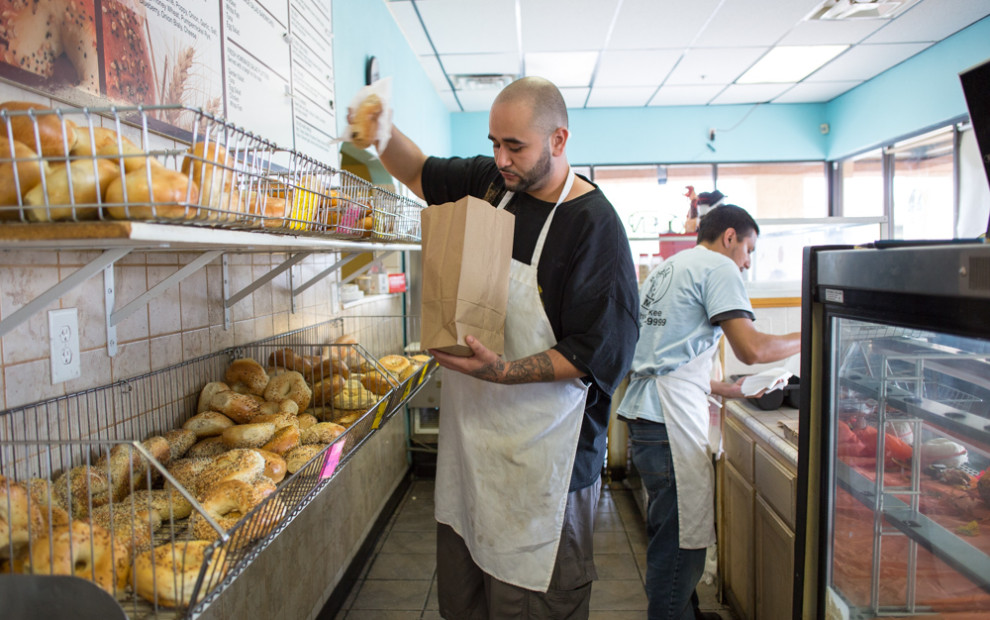 Early on these days, from the time the shop opens, he’ll let his nephew Yehia (pronounced “yeh-yeh”) Kher, who moved here from New Jersey to manage the shop, do most of the heavy greeting, order taking, register transacting. Kal stresses to us the importance of maintaining quality.

“You have to take care of the customer,” he says.

“Is Kal here?,” a lady asks Yehia. He tells her, in his thick Jersey accent, that Kal’s out running errands. “Just wanted to say hello if he was,” she says, and places her order for three or four breakfast sandwiches. A few minutes earlier, someone had ordered 12 egg-and-cheese sandwiches.

“Some of these people used to have their relatives back home ship them bagels,” says Kal, who goes through close to, he says, 60 pounds of shop-made cream cheese every day. “They don’t do that anymore.” 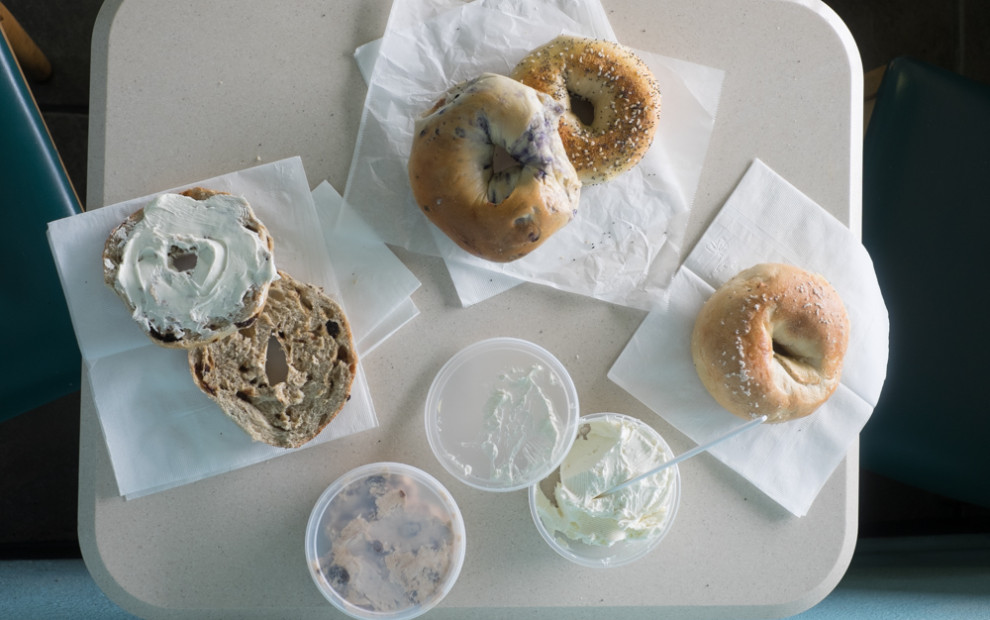 The Bagel Man sells more everything bagels than anything else. Kal has a soft spot for the cinnamon raisin bagel. But what’s the perfect bagel?

This is the product of not cutting corners, as most bagel-makers do today. While he only tweaked the recipe to fit Arizona’s climate, the bagels are still boiled. Still finished by baking inside of a revolving oven.

“It’s the old-fashioned way,” he says. “We do everything from scratch.” 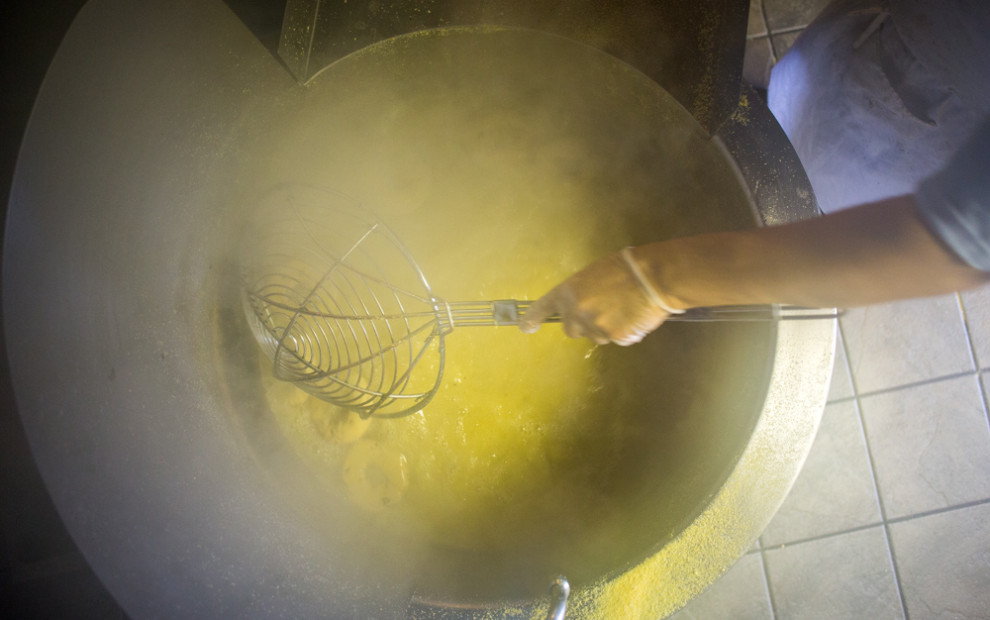 Many bagel connoisseurs today think that what really makes a bagel is New York’s special tap water. Science has mostly debunked this. At the same time bagels, and their bakers, began drifting away from New York to head west, the convenience and corner-cutting of an increasingly streamlined food system became the active ingredient in most recipes.

“I’d have no problem with any water in the country,” says Kal.

The people from Hightstown, he says, can’t tell the difference. The shop even sells a treasured New Jersey product called Taylor Ham, also known as pork roll, although it’s not on the menu. It’s salty, somewhere in-between bologna and salami. The Taylor ham, egg and cheese sandwich could stir up homesickness in near any Jerseyan, we’re told. 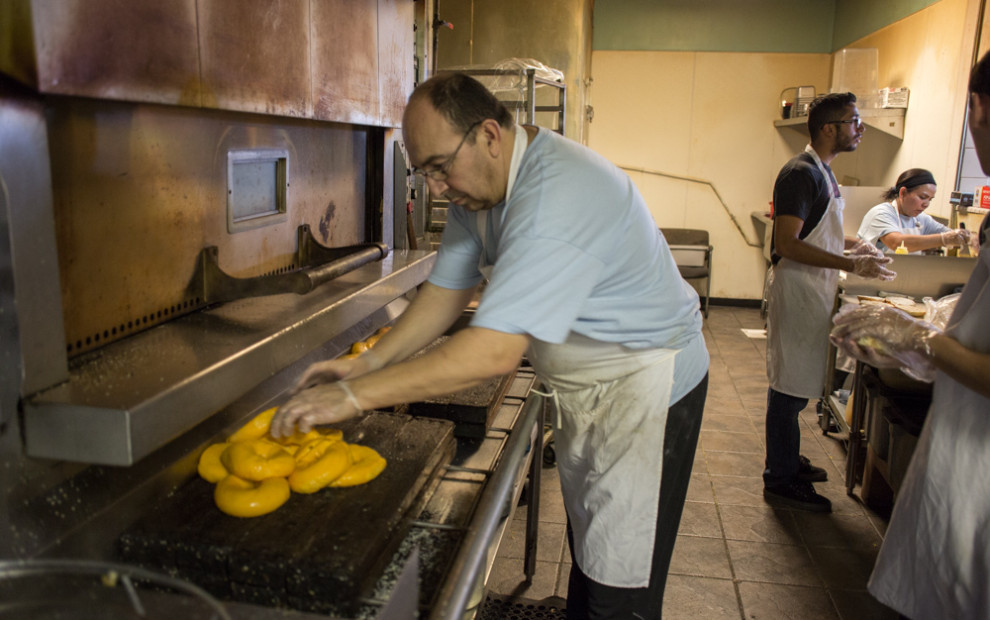 Kal has begun thinking about more location in Phoenix. “There are opportunities,” he says, to do so.

“Even if I don’t expand, I’m going to stay here,” Kal says about his bagel shop in Ahwatukee. His in-laws are here. There’s no snow, he adds.